For most homes and small offices the router is the WiFi edge. Logically exploiting the router as the home edge should be a catalyst for exploration, argues Stuart Griffin at Consult Red.

The intelligent edge is poised to propel media and the communications industry toward the next generation of connectivity and efficiency. The opportunities will be great and telcos and operators have the chance to gain.

With the advent of 5G, Mobile Edge Computing and the WiFi edge, partnerships and collaborations between Amazon, Google, Microsoft and telcos will flourish across both enterprise and consumer markets – according to ABI Research.

For telcos, there will be further opportunities to partner with AI developers, VR/AR applications pioneers and software engineers who might benefit from 5G speeds to deliver more immersive, interactive and accurate experiences.

Network service providers are already thinking beyond broadband access and evaluating their role in improving the customer experience – especially as new connected consumer devices permeate the home. The router is at the heart of the home network and in prime position at the WiFi edge. Operators have an opportunity to leverage this first mover advantage to be the brain of the intelligent home. But this is a land grab and the competitive advantage won’t last forever.

Turning the broadband router into the intelligent edge

The edge is already complex, consisting of a myriad of devices and gateways interacting through new and established wired and wireless technologies. One of them is the humble broadband router.

As it stands, the network and cloud generally bypass the router. It plays a very limited role in service delivery other than terminating the pipe. Service providers (other than the operator) have no access to the device and its potential. But could this be transformed if the broadband router were to become the primary hub for the intelligent Edge in the home and office. At first glance broadband and 5G fixed wireless may seem like competing technologies, but the 5G edge is not in the home and does not control the Wi-Fi that is used throughout the home. Even for a 5G fixed wireless deployment the smart router has role to play. A prime example is BT and EE home Wi-Fi service BT Halo 3+ which pairs with the Smart Hub 2 router and automatically connects to the EE mobile network for backup, should broadband connection fail. BT is marketing the broadband service as “unbreakable”.

No one disputes that Wi-Fi is going to be a huge part of our internet future. For most homes and small offices the router is the WiFi edge. Logically exploiting the Wi-Fi Edge should at very least be a catalyst for exploration.

Using edge technology to deploy an intelligent service component at the edge of network means the router can become an active part of a service rather than just passively enabling connectivity. Whether you’re looking to defend market share and/or current pricing by offering value-add services, or seeking to develop new revenue streams and grow market share, operators can transform the hardware router from a dumb termination of the broadband pipe to an agile platform.

Closing the gap between network and router

In these architectures the edge device does not host a customer facing application but instead operates as a compute node running a nano or micro-service that leverages the device position in the network to deliver a vital part of the overall service. The containerised micro-services that power the cloud and enable network virtualisation have generally been the preserve of enterprise servers or specialised network equipment.

The Comcast and Liberty Global-backed RDK have taken the technology a step further. It has developed an extremely lightweight implementation that uses OCI (Open Container Initiative) images to be compatible with hypervisors and orchestration technologies used by the cloud and network virtualisation. This development significantly closes gap between the network and router as an edge device.

By moving compute power, data storage and management on the edge, data can be collected, analysed and then acted on locally without needing to cross the network to a central data center or cloud. There are a growing number of sensors and devices that are always-on and continually sending more and more data – and super-fast, high capacity 5G will only see this sharply increase. Much of this locally generated data will be used primarily to generate local decisions. With the intelligent Edge, these devices can predictably make automated or real-time responses in milliseconds.

Applications at the Wi-Fi Edge

There are multiple other potential new services and technologies that could benefit from a smart router. For instance, Wi-Fi presence is an emerging technology whereby Wi-Fi analytics are used to detect the presence of people in the home. This has applications from burglar alarms to telecare.

One of the lasting outcomes of the pandemic is likely to be an increase in home working. Support for corporate VPNs and QoS that prioritises work activities such as video calls are likely to see growing demand. As the OTT players crack down on password sharing, they could use the router to securely verify that TV streams are truly in the home – this could open-up new business models such as unlimited streams in the home.

Having intelligence at the edge rather that in the cloud can also lower operational costs needed to deliver a service. Edge intelligence can reduce the data bandwidth, compute, connectivity and storage costs for a negligible impact on the router’s purchase or running costs.

We can all hypothesise about what the future looks like, and what services consumers will or won’t want. Either way, network service providers are going to need an agile platform that can host services at the edge even if, at this point, they don’t know exactly what they are.

The broadband router is an under-utilized asset that forward facing network service operators will explore as a gateway to adding value to their infrastructure at the intelligent edge. 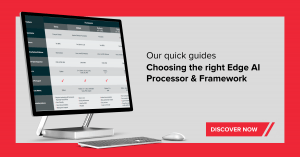 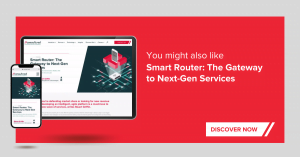